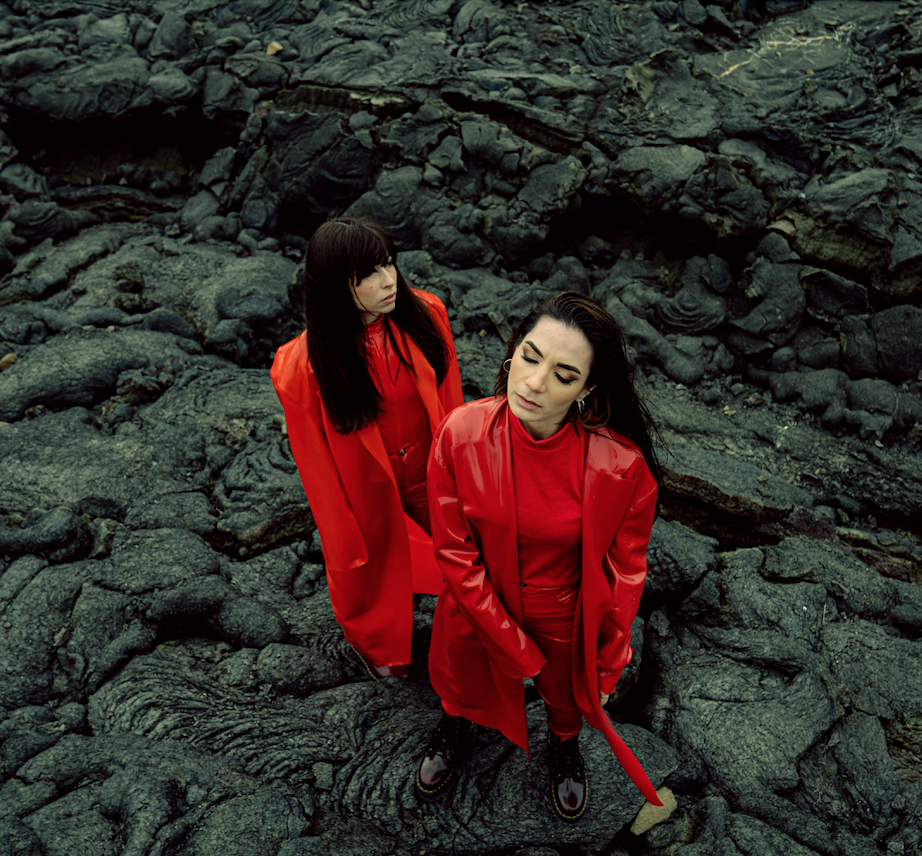 Fiercely independent self-made duo Giolì & Assia are blazing their own trail and blending their own sound. Their indie techno pop finds beauty in the contrasts of light and dark, hope and despair, classical and contemporary. It is a live mix of powerful melodies, spine-tingling vocals and the sonorous tones of their signature handpan all married to driving electronic rhythms. By harnessing the power of the internet with their stunning live streams, Giolì & Assia have gone from their small Sicilian hometowns to headline shows across the world. Their fan base and tour diary reach from Colombia, across the US to India, and their streams are in the multi-millions. Latest album Fire Hell And Holy Water on Ultra opens an exciting new chapter as the pair’s most complete artistic statement yet.

Multi-instrumentalists, singer-songwriters, DJs and label owners, Giolì & Assia are in complete control of their creative world. They wrote, performed, produced, sang and recorded their new album – as well as early breakout singles “Stay Closer,” “Endless,” and “Blame On Me” on labels like Spinnin Records – entirely alone. Making such a statement is important for these musical and life partners in an industry that is still all too dominated by men. The accomplished lyrical themes of their album reflect that and represent the highs and lows of their personal life, the challenges of the music industry and even the tragic love story of characters from Greek mythology.

These powerful messages are conveyed by music that is just as moving. It is all made live by the duo, on one side Giolì’s long-perfected playing skills on a range of instruments. Whether it’s the piano, cello, drums, guitar or the distinctive handpan which unifies the Giolì & Assia sound, she translates very real and personal emotions through the instruments she has been playing all her life. On the other side are Assia’s exquisite vocals which are often heartbreakingly celestial and inescapably emotional. The pair released two early albums on their own Diesis Records that were playful, unconstrained explorations of where they were at the time. The second, Night Experience in 2018, was inspired by their Privilege Ibiza residency, but Fire Hell And Holy Water is the first true representation of their innermost musical selves.

These young creative powerhouses have made their own success in organic fashion on their own terms. They first came together on the internet. Assia had always been singing but had never broken out of her small hometown. Giolì was studying in London and already had a solo project. Assia, was graduating in foreign languages, and came across the fan page and the pair began messaging before quickly realizing they had more than just music in common. After moving in together, Assia began managing Giolì’s fledgling music career. She was playing live percussion as well as DJing around Europe but by 2017 they saw a creative as well as romantic future together. Giolì & Assia was born.

A shared love of house and tech made it natural for the pair to encompass club-heavy beats into their sound. Further influences from Coldplay to Alt J to The Chainsmokers informed how they approached their unique hybrid sound and also inspired them to start their now legendary and boundary-pushing video series “#DiesisLive”. With a look as stunning as their sound, they have streamed from unreal locations such as a volcano in the Aeolian Islands, the Andromeda Theater in the Province of Agrigento and next to a breathtaking Fjallsarlon Glacier Lagoon in Iceland. They are immense technical challenges and further proof that Giolì & Assia do not do things by half.

Their latest US tour inspired Fire Hell And Holy Water. It saw them play sell-out shows in a range of venues which they truly made their own with their intense and introspective mix of contrasts – grand crescendos then quiet moments of calm, driving drums with more floating melodies, bittersweet beats and beautiful ballads that will make you smile, cry or dance, sometimes all at once. Each show is fully live and improvised in the moment so unique every time, but there is also a hybrid show with Assia singing as Giolì lays down a mix of the Afro house, techno and underground tech the pair love so much.

Whether in the studio or on stage, Giolì & Assia take you on an emotional rollercoaster unlike any other act in the world.